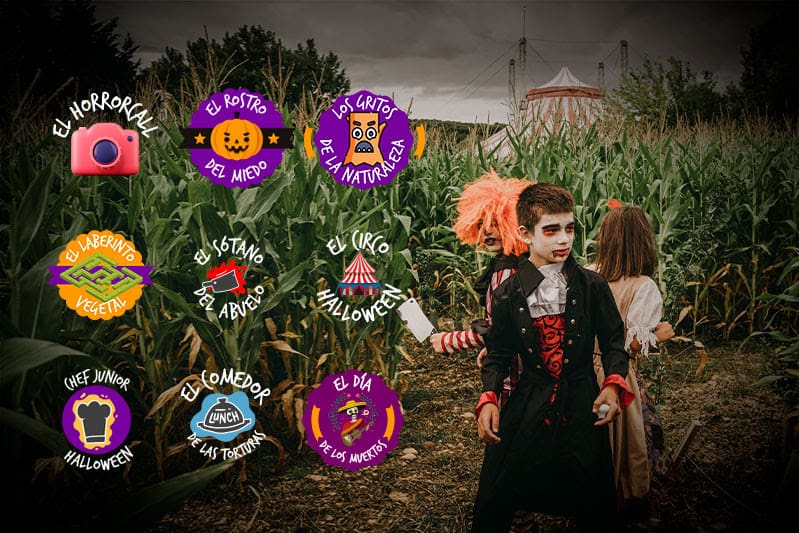 News 2022: ‘The torture canteen’, with three different levels of ‘suffering’, ‘The face of fear, ‘The vegetal labyrinth’ and ‘Grandpa’s basement’ will cause the most fun fear among the participating public.

The children’s public will also have their ‘outerating’ spaces such as the ‘Horrocall’ and the ‘Day of the Dead’ or the renewed activity ‘Chef Júnior Halloween’.

New ‘siniestra’ function at the Circus with magic, acrobatics, humor and surprises in a wild cabaret.

The park has organized a costume contest to search for the ‘mutant’ family among the people who visit Sendaviva during Halloween. The winner will receive a family bonus for the 2023 season.

One more year, Halloween’s most familiar ‘terror’ will return to Sendaviva, the Navarrese park of adventure and fun. And it will do so for 19 terrifying days, between September 24 and November 13 (last day of the season), with a schedule from 11 a.m. to 8 p.m., and with a program with great surprises that will offer ‘sinaster’ experiences to those who dare to visit it.

The park has prepared several novelties for this new edition of Sendaviva’s Halloween. New passages such as ‘The Face of Fear’, ‘The Vegetable Labyrinth’, ‘Grandpa’s Basement’, ‘Chef Junior Halloween’ and ‘The Torture Dining Room’. In addition to several areas of sinister photocalls, the renewed passage ‘The Screams of Nature’ and the new circus function.

Sendaviva will open new spaces ‘from the afterlife’. Thus, in the Birds area, he will offer in ‘The Torture Dining Room’ the first interactive experience for a family Halloween, where those who participate will become protagonists. A chef and the head of the room are waiting for fresh meat to be able to prepare the dishes, selecting the best meats among the public, who will feel the chilling feeling of being immobilized and being at the mercy of these characters. This ‘torture’ game will have three different levels depending on the ‘torture’ methods used by the chef, and it can be accessed as a victim or simply as an observer.

Also in the Aves area, next to the ‘Recycling Game’, you can take fun snapshots in the ‘Day of the Dead’ photocall, with a decoration set on the Mexican holiday.

For their part, in the Pueblo area, anyone who visits the park will be able to enter the passage ‘The Face of Fear’ where, in a small house, they must face a character obsessed with stories, movies and horror stories, and who has a collection of the most ‘disturbing’ items. In addition, in the same area, in ‘Horrorcall’, you can be photographed and take terrifying snapshots with different elements linked to witchcraft.

Terror will take over the Lake area. In the new ‘vegetable Labyrinth’ the public must tour a dark garden that hides many surprises and scares inside and from which it is almost impossible to escape. For his part, the old man Jack will be the ally of those who venture into ‘Grandpa’s Basement’ to, following his clues, scare away the ghosts that inhabit him. In addition, in the renewed passage ‘The Screams of Nature’ with new terrifying beings, nature will reveal itself again against the human being and, after becoming the owner of the abandoned path, does not allow the human being to escape from it.

In the ‘Chef Júnior Halloween’ activity, at the Lago Restaurant, the witch Maruja, who lives alone with her seven cats in the park, invites you to cook with her with her gloomy cauldrons. With her potions and quick recipes, the crazy witch will always laugh at her helpers.

In addition, during these 19 days, the park will be transformed with a ‘scary’ decoration, especially in the Lago Restaurant with ‘La Brasería siniestra’, and during your visit the public will be able to be ‘scared’ by beings from the afterlife while they inhabit different corners of the park.

Sendaviva has organized a ‘hooky’ costume contest for the whole family. The park is looking for the ‘ Mutant Family’ and encourages all people who visit the park since September 24 to come dressed in the most original and terrifying way.